You are here: Home / Chess Blog / Chess Mate – Other Types of Online Games

Chess Mate from multislot.com, is the perfect free online pokies game for you if your brain ever needs a break from playing none stop chess, then you might want to try this old fun and free pokie machine. This is a game like no other chess games, this slot contains adorable horses as knights, goofy looking rooks, daring knights, and hip-hop bishops. There is an element of “cool” about the game, which is understandably where this chess themed slot gets its “mate” title from. 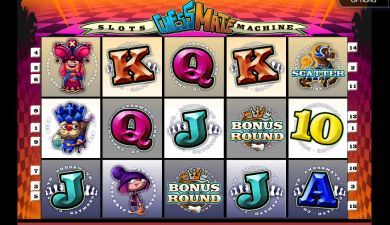 As for the gaming structure and set-up, Chess Mate is played over a total of 5 reels and just 15 paylines. That makes it a rather small-scale video slot. Chess Mate will permit you to adjust the paylines as you see fit, as well as choose to bet anything from 1 to 5 coins per payline. Players are also at liberty to select coin denominations of 5p, 10p, 25p, 50p, and £1.  Floor bets in this pokies slot game will cost you just 5p per line, per spin, while ceiling bets will set you back just £75 per spin.

Wild symbol: The chessboard itself is used as a wild symbol in Chess Mate. Wild symbols are substitute icons, which can replace themselves with any other that you need to win a payline, save for scatters and bonus icons. Wilds also happen to be the best paying symbols in the Chess Mate slot.

Scatter icon: The scatter icon in Chess Mate is the knight symbol. This cute and cuddly horse symbol can trigger a free spins bonus round when 3 or more such symbols appear anywhere on the reels. No scattered wins are paid out with these symbols.

Free spins: The free spins bonus round in this slot is rather predictable and basic. Players will be rewarded with a total of 3, 6, or 9 free spins, for landing 3, 4, or 5 scatters anywhere on the reels during the base game. The feature can be retriggered if you land more scatter son the reels whilst the bonus is being played.

Bonus icon: There is also a bonus icon which appears in Chess Mate. This symbol can trigger a bonus round when it appears 3 times on any active payline. This is not a scatter icon – it must appear on a payline to be of any use at all. Bonus icons must appear on the second, third, and fourth reels.

Bonus round: What you get with this bonus round is a rather enjoyable feature. Players will get to choose three chequered boxes on the reels, and pocket prizes based on which chess piece appears behind them. Just as in the game, the queen is most valuable piece, and is worth the most in terms of cash prizes.

As we’ve briefly touched upon, the best paying symbol in this video slot is the wild icon. When players land 2, 3, or 4 such symbols on any active payline, they can walk away with wins worth 20, 200, or 2,000 coins. However, if they land all 5 in a winning combination, then they will win a magnificent 20,000-coin haul.

Chess Mate is a clever little video slot. By replacing boring old chess pieces with human-like characters based on those same pieces, they have made chess relevant for players not necessarily interested in the original game. Chess Mate is fun, it is funky, and it should be a breath of fresh air into the board game genre of slot machines.