You are here: Home / Chess Blog / Chess Against Computer 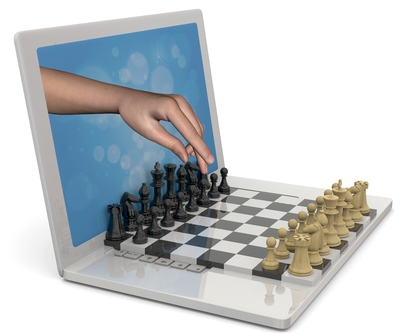 You might not know this, but chess is one of the oldest games that exist today. It is said that its history can be traced back to 1500 years to India and China, from where it spread to Persia. When the Arabs invaded Persia, the game was adopted by the Arab world as well. Chess had evolved a lot over the past few years, but it is said that it got its modern form in the 15th century in Europe. The game became particularly popular in the 1880s and the world saw chess tournaments in the latter half of the 19th century. In the 20th century, the World Chess Federation (FIDE) was developed. In the 21st century, the use of computers to play games originated, whereas online games made their appearance in the 90s.

Here are some interesting facts about chess that we thought you would like:

How to Play Chess against A Computer

One of the most frequently asked questions is that how can you play chess against a computer. One thing that you must know is that playing chess on a computer is very different from playing chess in real life. Human beings are more prone to error, but computers have evolved a lot and have improved on the overall level of chess. We need to understand these changed in order to assess the strengths and the weaknesses that computer chess has. Computer chess is run with chess engines that calculate perfectly since they are not affected by human emotions, stress, and anxiety. A chess engine basically identifies a position from various angels so that it can come up with concrete variations. If you want to play chess against the computer, you need to avoid dangerous combinations because it is hard to beat a computer in a tactical game that requires careful assessment.

The thing is that when human beings play with each other, there is a lot of psychology involved since one player perceives the other as a possible threat and become accustomed to attacking in order to win. Computers are not affected by psychology and you should know that it is next to impossible to trick a computer. You might just be wondering how you can beat the computer if it is so good at what it does. Well, one thing that you can do is play with your strengths and stay away from complicated openings and tactical lines that might make you lose. One good way to go about is to learn from the chess program of the computer, so that you can mould your mind according to the pattern.

Tips for Using the Computer for Chess

Remember that playing against a software program is not easy and will require a lot of concentration on your part.  The first thing that you need to do in order to use the computer is to get a good program. Some of your options are:

You need to learn how to change the settings on a computer so that you can play against varying difficulty levels. You can change the settings so that you can learn to play at different levels. There are some good programs out there to try; Chess Master is one example. If you will set it to its fastest mode it will beat you 100% of the times.  Some ways to playing it includes:

You can use these tips on any chess software and you will win 75% of the games. This is the closest that you can get to winning. You can play chess online as well as there are a number of sites that you can log on to, because they provide good information about chess. Some of these websites are:

In addition to this, you can also play chess on the internet against other players. There are many servers that are available for free, where you can practice. This can give you a great insight about how you are supposed to play chess.

The Pros and Cons of Computer Chess

People who are just getting started, playing computer chess can be a great decision because it will help you in sharpening your skills. For people who are already skilled at chess, this can be a great opportunity to play with a good partner. Remember that most of the computer chess games are not for free. Before you purchase any game, it is important that you assess its advantages and disadvantages. Let’s have a look at them.

There are a lot of advantages of having your own chess computer because that way you can play whenever you want to and will not have to wait for a partner whenever you have the urge to play. Other than this, you can even take advantage of the tutorials that will help you in sharpening your skills and learning new tactics. The best part is that you can cancel a game whenever you feel like quitting.

Even though there are a number of advantages of playing the game, there are a few disadvantages as well. Remember that, you are playing against a computer, so unlike human beings, they will not be making the same mistakes as a chess player, this makes the computer a very formidable opponent that you need to be careful of. Other than this, these programs can be quite costly, which means that you will end up spending several dollars and will still not have enough chances to win.

Why Go For It?

It is important you know that chess computer helps you in developing your skills and you will learn several new tactics that will help you out in real life.  You will not face the anticipation that people generally face when they are playing a chess game, in which they are waiting for their opponent to make the critical mistake. Make sure that you weigh out the advantages and disadvantages when opting for a computer chess game.