There are a large number of chess clocks for sale on the market. Speaking in the broadest possible terms, they break down two ways:

In our opinion there is very little reason to buy an analogue chess clock. First of all, since these clocks are mechanical with moving parts, they are much more likely to break than a digital clock.

Secondly, they cannot be set with a time delay. Many chess tournaments specify time controls with a delay. The delay prevents a tournament game from degenerating into a “clock banging time race,” and is a very important part of serious tournament play. 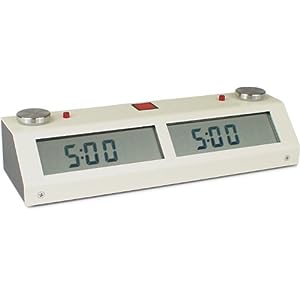 The Chronos II is a hands-down favorite for three reasons (1) it is far more popular among tournament players, (2) it is the most durable chess clock on the market – it comes in a metal casing, and looks like a small tank and (3) there is a light at the top of the clock which indicates who is “on move.”

This last factor is overlooked in all reviews, however we consider it important for most serious chess players. That’s because the majority of tournament players like to get up and look at other games while they are in the middle of their contest. They also want to be able to glance back at their game, so they can see if it’s their turn to move, without having to return all the way back to the board. The Duel Timer Champion is one of the only clocks on the market that makes no provision for this.

The Chronos II is very popular among tournament players, and there is a thorough video on YouTube that shows how to program the clock for frequently used time controls. It is a hands-down choice at the high end of the market.

Other digital chess clocks There are many alternatives as we leave the high end of the market. We digested a large number of comparative reviews, and also read many comments on Amazon from consumers who purchased a variety of clocks, and have come away with a favorite.

The two digital clocks in the lower price range most frequently seen on the tournament circuit are the Excalibur Game Time II and the Saitek Competition Digital Chess Clock. On Amazon they are both listed at 33.00.

Excalibur Game Time II: More than one owner expressed dissatisfaction about the Game Time II. Most complaints centered around the construction, which was described by diverse owners as “flimsy”, “fragile,” and other unflattering terms.

Saitek Competition Digital Chess Clock: The only complaint about the Saitek model is that “the instructions were a bit fuzzy.” However, there is an excellent instructional video on YouTube that more than compensates for this factor.

In his review on Amazon, a high school chess coach in San Antonio wrote the following:

After trying several other timers, this has become the timer of choice for our high school’s chess club. All of the timers we purchased for the chess club are still working great. Not one failure in over 4 years of use.

At the high end of the market, we love the Chronos II. Chess clocks have been known to break. There’s no question the Chronos II is the most durable clock on the market, and we really like the design. However, since the Saitek Competition Digital Clock also appears to hold up very well over time, it isn’t so easy to see $60.00 worth of extra value built into the Chronos II.

Given that amount of savings, we suspect that many people will seriously consider the Saitek Competition Digital Chess clock. And since this is our hands-down choice at the lower price point, we’re going to share some of the features with you:

Multiple preset time controls.
Clear display.
Broad base and a sturdy design
Rubber stoppers on the bottom that keep it firmly in place.
Lights on the toggle button indicate whose turn it is.
A red light indicates if someone runs out of time.
YouTube instructional video.

Finally, we want to acknowledge the DGT 960, which retails for 40.00 on Amazon. It’s not our favorite design, but what we like about this clock is that it can automatically generate 960 random starting positions with the touch of a button.

The display shows the placement of the pieces. Random chess may really catch on someday. The pieces are set up on random squares, and this frees the chessplayer from the need to study volumes of opening theory, which is required at higher levels. Fisher Random Chess eliminates the opening study, and creates a contest based on pure chess skill.